ANCIENT EGYPT
Ancient Egyptian writings are called hieroglyphs; at one point, the Egyptian system of writing used more than 700 hieroglyphs. Hieroglyphs used pictures to represent objects, actions, sounds or ideas, and some hieroglyphic pictures stood for whole words. Although modern-day Egyptians write with pen, paper and computers like the rest of the world, ancient Egyptians used specialized tools to create hieroglyphic writings on papyrus and the stone walls of pyramids and caves. 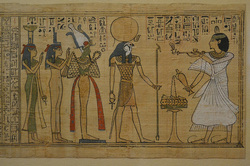 This is an image of some papyrus that has been used to record a story of some sort.
Although many Egyptians wrote on walls, leather and pottery, the most common material for writing was papyrus. Papyrus is a marsh plant that grows tall, straight reeds with hollow stems. Egyptians harvested the papyrus reeds and cut them into thin strips, which they then lined up on a flat surface so the edges of the strips overlapped slightly. The reeds were beaten or pressed together and left to dry; the juices in the plant fibers provided a natural adhesive that bonded the strips together. The dried papyrus sheets closely resemble modern paper and provided a smooth surface for writing. 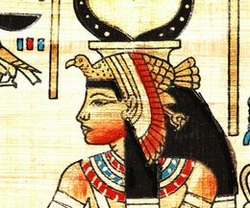 Egyptians mainly used only ink colors black and red
Egyptian writers used black ink for the majority of writings; red ink was typically used to highlight dates and subject headings. Scribes made ink by     .   adding either black carbon or soot or red ochre to a mixture of gelatin, gum and beeswax. The ink was typically formed into a soft cake for storage; scribes diluted it with water when they were ready to write. 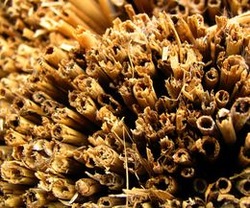 This is a picture of some reed. This was used to make pens in Ancient Egyptian times.
Egyptian pens were made from the Juncus Maritimus plant that grew on the banks of the Nile river. Egyptian writers chose thin, sharp reeds and shaped them for use as a precise writing tool. The scribe cut the ends of the reeds to allow the reed material to absorb the ink pigment (like a paint brush), and moistened the reed with water before dipping it into the ink to write.

You can acutally make your own reed pens and its quite simple. Now days they are used for writing complicated material such as Arabic Bibles, characters and more.