How have civilizations developed over time and space evolving into modern day societies?

<-----This image is of the Pyramids of Giza- They are the best preserved of the Seven Wonders of the Ancient World. Giza is near modern day Cairo.

Ancient Egypt. About 3,000 years before the Christian era, a civilization was developed in Egypt. The Egyptians created and developed tools, instruments and much more that is still used in the modern day era. Ancient Egypt was one of the strongest civilizations to ever happen, and many of the things they did, we do today.

The Country of Egypt 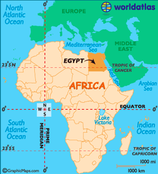 Egypt is located in North Africa and Southwest Asia.  The majority of the country is located in northeastern Africa, but its border stretches into Southwest Asia, connecting the two continents.  Egypt has an area of about 1,01,000 square kilometers and a population of over 82 million people, making it the fifteenth most populated place in the World. The neighboring countries of Egypt include, Jordan, Saudi Arabia and Israel.


This is an image of Africa. The highlighted area in Egypt.